The new Pro models in the iPhone family pull even further ahead of their vanilla counterparts with a faster GPU, improved camera hardware and, most importantly, the first ProMotion display on an iPhone. 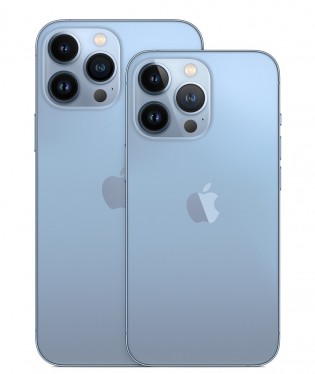 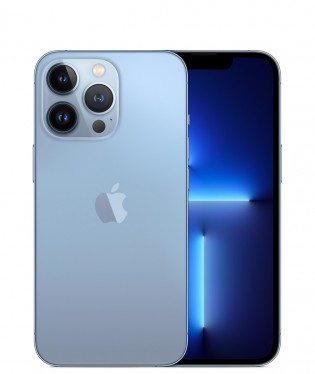 “ProMotion” is Apple speak for a high refresh rate display. On the iPhone 13 Pro and Pro Max it can go as low as 10Hz and as high as 120Hz. iOS has been reworked to make the best use of the new display.

The choice of display sizes is the same – a 6.1” iPhone 13 Pro or a 6.7” Pro Max. The notch that hosts the TrueDepth camera is now 20% smaller, while the new panels are up to 25% brighter outdoors. 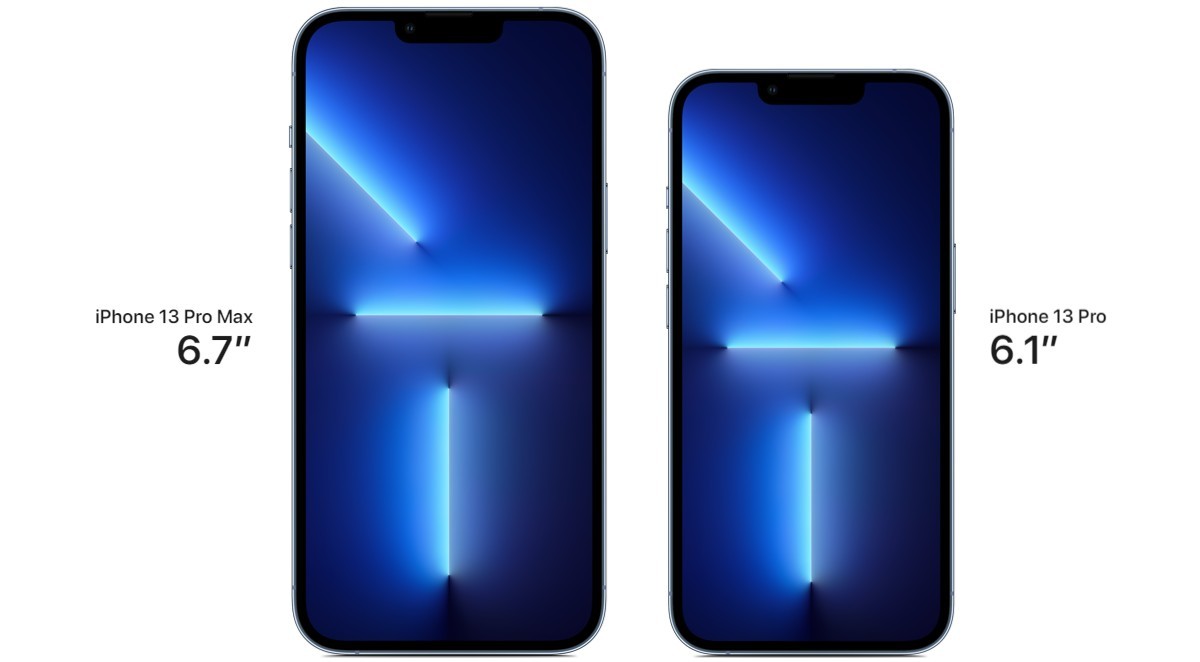 Next, let’s talk about the camera. Apple stuck with 12MP resolution, but improved the lenses, sensors and image processing.

The main camera sensor has an impressive pixel size of 1.9µm and a brighter aperture of f/1.5. For comparison, the 12 Pro Max had 1.7µm pixels and an f/1.6 lens. This means that in low light the new model can capture up to 2.2x more light. 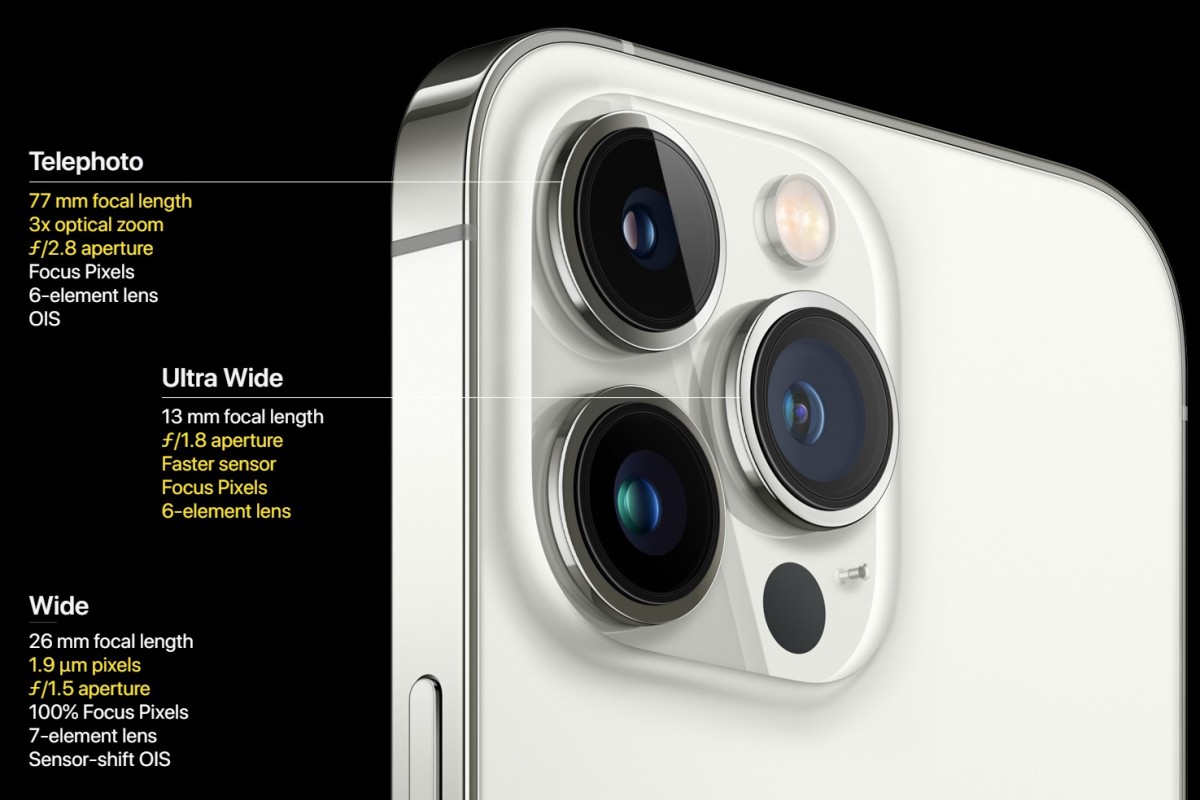 Next is the ultrawide camera, which also has a better lens – a 6-element f/1.8 one with autofocus to be precise. This is compared to the f/2.4 lens on last year’s Pros, which results in an up to 92% more light hitting the sensor. And a new trick – the autofocus allows the ultrawide module to double as a macro camera. All cameras on the Pro models support Night mode, even the telephoto one.

Also, the new chipset (we’re getting to it) has hardware support for ProRes video, Apple’s professional video codec. The Pros can record at 4K at 30 fps and you can edit the ProRes videos right on the phone. Dolby Vision HDR is also supported at up to 4K 60 fps. 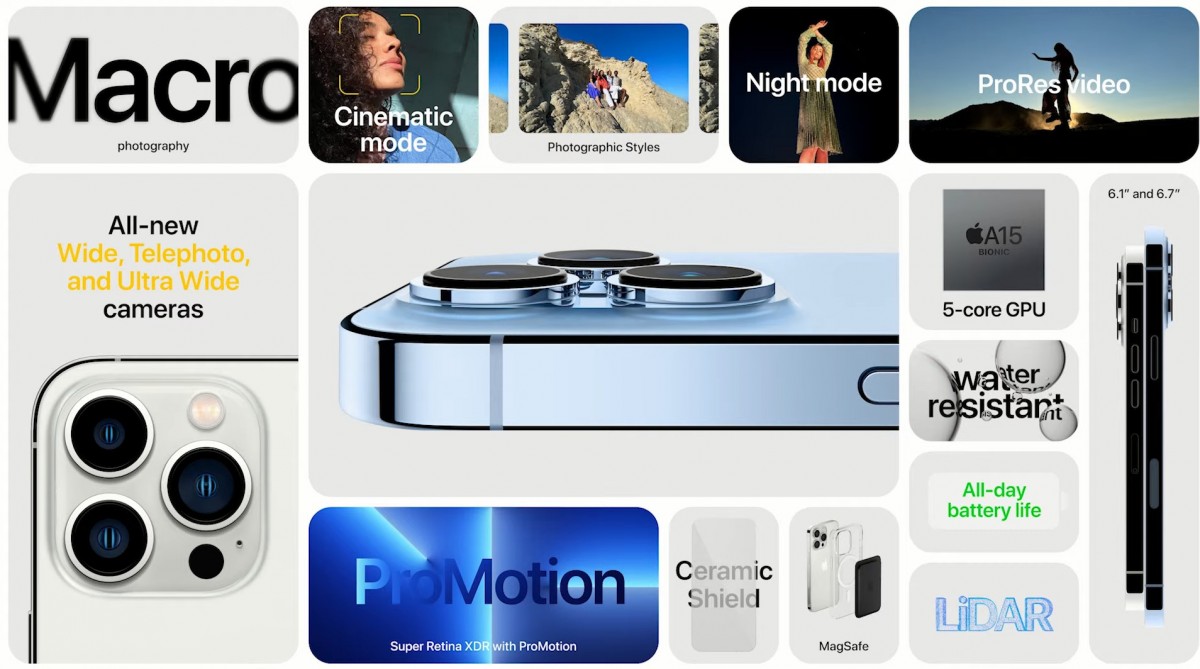 Interestingly, the iPhone 13 Pros record a depth map alongside the video, which allows you to change the depth of field even after you have finished recording a video. Another new feature is Photographic Styles which automatically edits a photo, one element at a time (applying different corrections to the subject and background, for example). This will be enabled on the vanilla 13 models later on.

Now, let’s talk about the Apple A15 Bionic chipset. It is made up of a whopping 15 billion transistors (the A14 had 11.8 billion). It is fabbed on a 5nm process, but Apple didn’t offer any more specifics. The chipset maintains the 2+4 CPU structure with two big cores and Apple advertises it as “50% faster than the leading competition”, although it’s hard to say what constitutes leading competition for the Cupertino company.

The GPU now has 5 cores, giving it an edge over the vanilla phones, which use a version of the chip with 4 cores. The Neural Engine has been beefed up too and now deliver 15.8 TOPS, up from 11 TOPS on the A14 (we’ll only point out that a Snapdragon 888+ advertises 32 TOPS).

The battery life has been improved, thanks to a combination of a more efficient screen, more efficient chipset and a bigger battery and iOS optimizations. On average, an iPhone 13 Pro will last 1.5 hours on a single charge compared to a 12 Pro, the 13 Pro Max can last 2.5 hours longer than the 12 Pro Max. Apple didn’t mention a faster charging system, so that means 20W wired over Lightning and 15W over MagSafe.

The two Pro phones will be available in Graphite, Gold, Silver and the all-new Sierra Blue color, which required a new process to create several durable layers of coating. The chassis is made out of stainless steel, the front is Ceramic Shield, the back is matte glass. The camera lenses are covered with sapphire crystal.

Apple also improved the 5G connectivity with support for more bands. By the end of the year, the iPhone 13 series will work on over 200 carriers around the world, spanning 60 countries. The Smart Data feature will switch to 4G to save battery when a high-speed, low-latency connection is not needed.

Before we mention pricing we should talk about the storage. It still starts at 128 GB, goes through 256 GB and 512 GB options and introduces the 1 TB storage option. 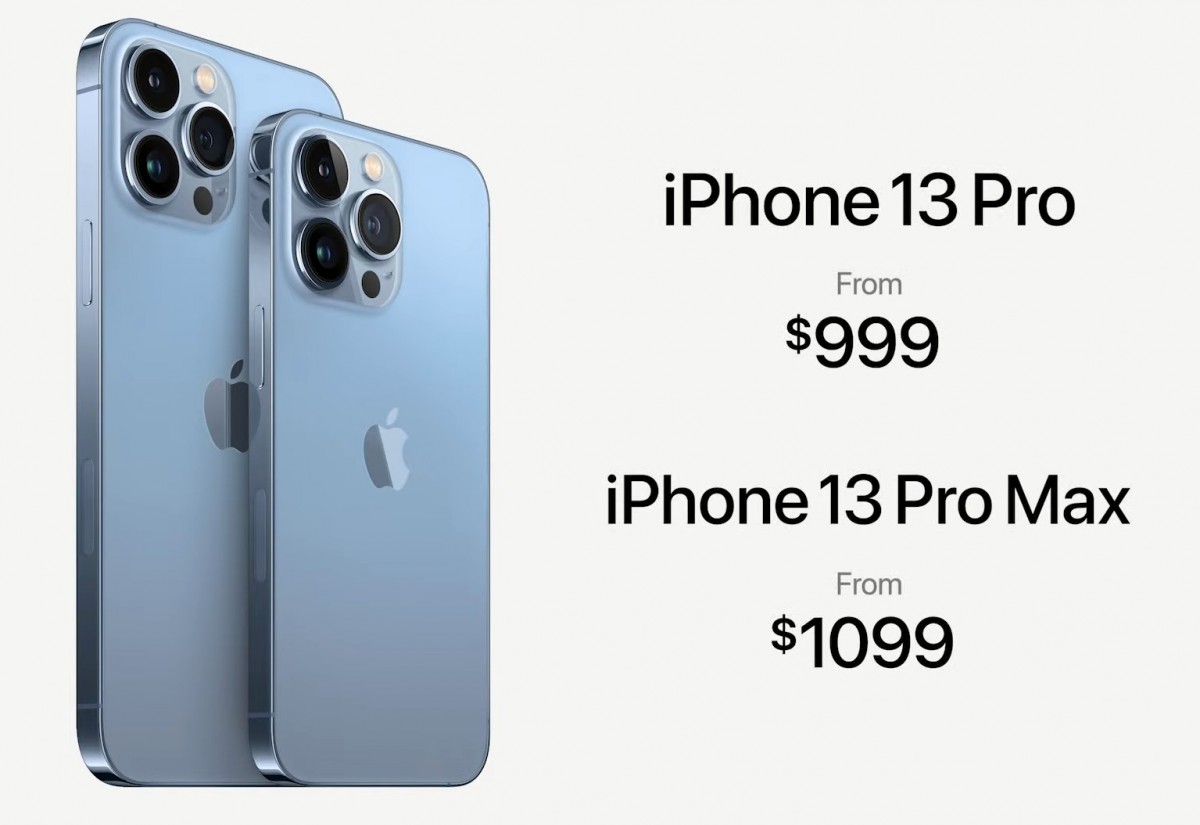