After months of waiting, the Huawei P50 series has finally been revealed. There’s no Pro+ model this time around, just a vanilla and a Pro phone. But both feature improved cameras and some interesting choices for chipsets, more on that in a second.

Let’s start with the cameras – they are still Leica-branded, both models feature 10-channel color sensors and improved telephoto modules. The P50 pair is equipped with the same main camera – a 50MP sensor sitting behind a 23mm lens with an f/1.8 aperture and Optical Image Stabilization (OIS).

The Huawei P50 Pro also has a 40MP black & white camera, this one with a 26mm lens and an f/1.6 aperture. Then there’s the 13MP ultrawide-angle camera with a 13mm f/2.2 lens. The cameras are also assisted by Laser autofocus.

For zooming in, there is a periscope lens. It has only 90mm focal length, less than most periscopes we’ve seen so far (that’s around 3.9x magnification), but the high resolution 64MP sensor offers a lot of flexibility – digital zoom goes up to 2,700mm. This lens has an f/3.5 aperture and OIS.

Zoom demo: the Huawei P50 Pro has a periscope lens with a high-resolution sensor

The Huawei P50 has a periscope of its own, for the first time on a non-Pro model. This one has 125mm focal length (5x zoom), though with a more modest 12MP sensor behind the f/3.4 lens with OIS. The vanilla model has a slightly narrower 16mm ultra wide lens and a similar 13MP sensor. Both models have single 13MP selfie cameras.

The P50 Pro feature XD Fusion Pro, an image fusion system that doubles the amount of gathered light compared to the P40 Pro and increases dynamic range by 28%. Both phones top out at 4K video capture, there’s no 8K option. For slow-motion clips, they can do 1080p @ 960 fps.

The Huawei P50 Pro will come in two versions – one with Kirin 9000 and one with Snapdragon 888. Interestingly, both versions only support 4G connectivity, even if both chipsets are clearly capable of 5G.

The vanilla Huawei P50 will only come with a Snapdragon 888 chipset, no Kirin option here. And it is limited to 4G again. This model has 8GB of RAM and 128/256 GB storage, plus the microSD slot. Naturally, both models run Huawei’s HarmonyOS 2.0 out of the box.

The vanilla P50 gets a flat 6.5” OLED panel instead with the same resolution. Its refresh rate is only 90Hz, but the touch sampling rate remains at 300Hz. This one supports HDR as well.

The two phones have similarly-sized batteries too – 4,360mAh for the Pro and 4,100mAh for the vanilla. Both are equal when it comes to charging, supporting 66W over USB-C and 50W wirelessly.

The similarities continue – both phones have stereo speakers and both are rated IP68 for dust and water resistance.

Both P50 models will be available globally (which may explain why they are locked to 4G only). Pricing information and launch dates are yet to be announced.

The Huawei P50 Pro will be available in five colorways, the vanilla model will offer three options: 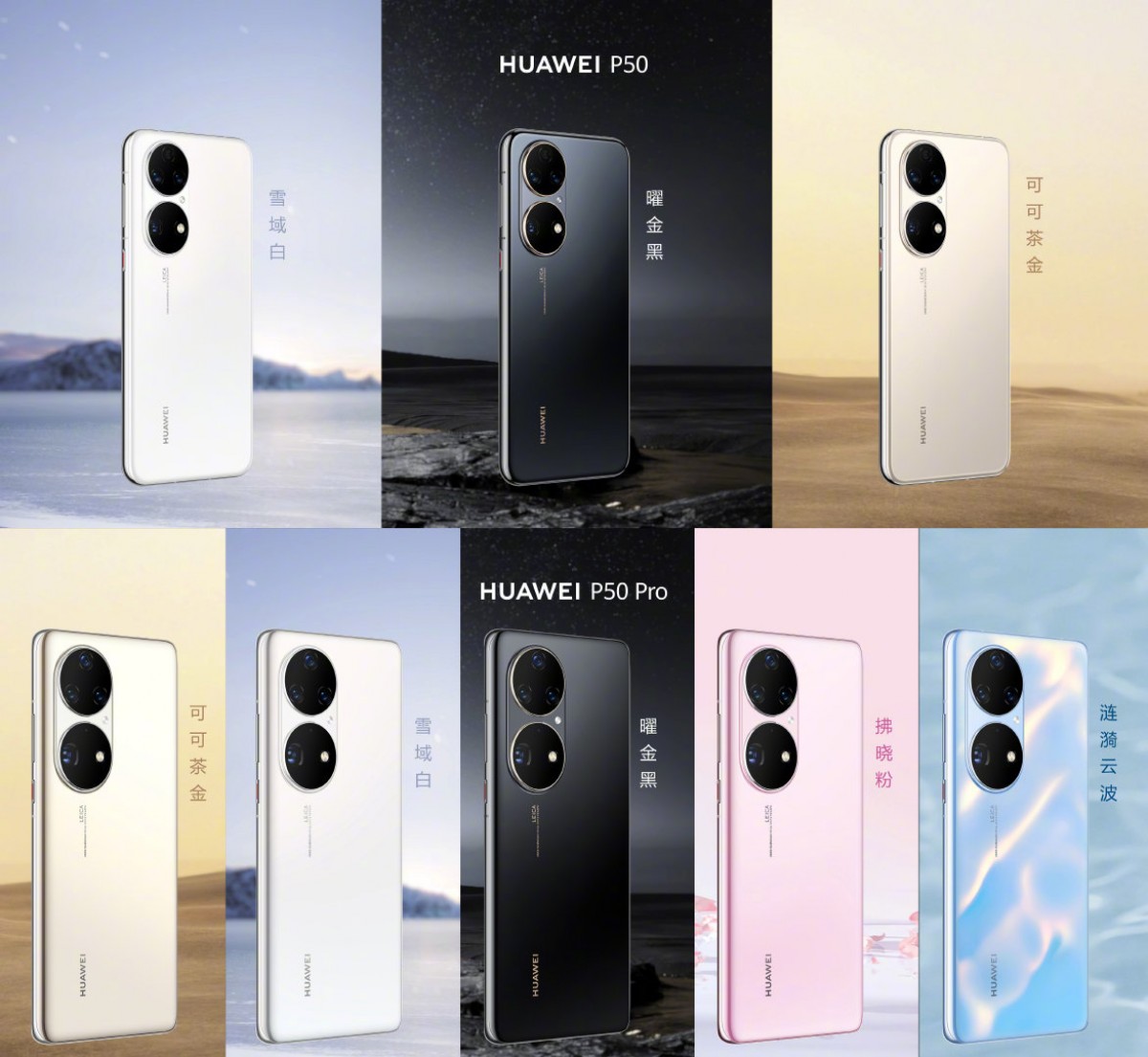 Also, check out these cases, which will come with a matching wallpaper:

Two other cases take inspiration from the dual-circle camera design. One puts a kickstand around it, the other uses it as a flip-up selfie ring light: