A month ago Lenovo launched the Yoga Tab 13, Yoga Tab 11 and Tab P11 Plus with global availability. Now clues have appeared of another slate, a sequel to the Lenovo Tab P11 Pro from last year. Unlike the first three, which have IPS LCDs, the P11 Pro has an 11.5” OLED display. However, despite its “Pro” moniker it is powered by the mid-range Snapdragon 730G chipset. The P11 Plus is no powerhouse either, packing a Helio G90T.

The Lenovo P12 Pro (TB-Q706F) was spotted on the Google Play Console and is getting a major performance upgrade with a Snapdragon 855 (or possibly an 860). It’s not quite on the level of the Yoga Tab 13, which is equipped with the newer Snapdragon 870, but it is smaller and should appeal to OLED fans. 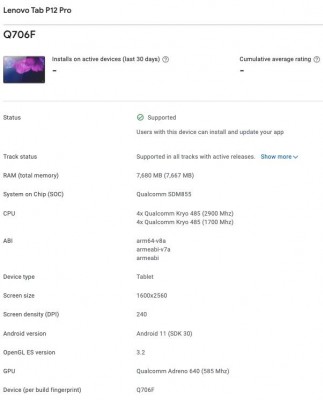 While the Console doesn’t list panel type, the 2,560 x 1,600 px resolution is higher than the P11 Plus and matches the P11 Pro, so the display should be in the same class.

The Lenovo P12 Pro will have 8 GB of RAM and will run Android 11 out of the box. Unfortunately, these are all the details from the Console. However, looking at the P11 Plus and P11 Pro, the new model should feature fast charging (20W or higher), quad speakers and possibly a dual camera on the back. An aluminum frame is not out of the question either.

The P12 Pro (TB-Q706F) was recently registered by the EEC, which doesn’t add any more details but mentions a related slate – the TB-Q706Z. The registration was issued in mid-July, so it shouldn’t be too long before the official announcement.