Micromax launched the In note 1 in India in late November and the company has been working on a Pro follow-up to that model. One unit was spotted running Geekbench and besides revealing the name, it also listed a model number (E7748_64) and chipset information. 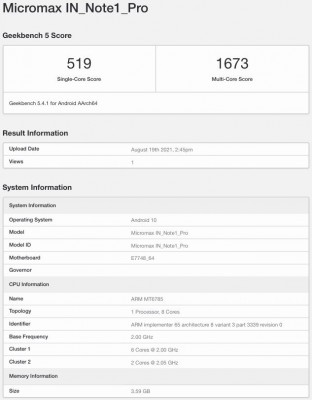 Early Geekbench 5.4 result from the Micromax In note 1 Pro

This particular phone ran Android 10 with 4 GB of RAM. This again matches the vanilla model, though the OS now feels even older than it did a few months ago.

When will the Micromax In note 1 Pro launch? In other words, what’s taking so long? The E7748 was certified by the Bureau of Indian Standards way back in December, but it is yet to appear.

Back then a company official mentioned 6 GB of RAM (an option by the looks of it), a high refresh rate display (90 Hz) and Widevine L1 support for high definition video streaming. However, we haven’t heard much about the phone since.