Motorola has launched the Edge 20 Lite, Edge 20, and Edge 20 Pro smartphones for the global market. The company still has an event planned on August 5 that will take place in China, and it will see a device with the name Moto Edge S Pro get unveiled.

Motorola has revealed none of the phone’s specs, but we suspect this is an Edge 20 unit with a different name for the Chinese market. 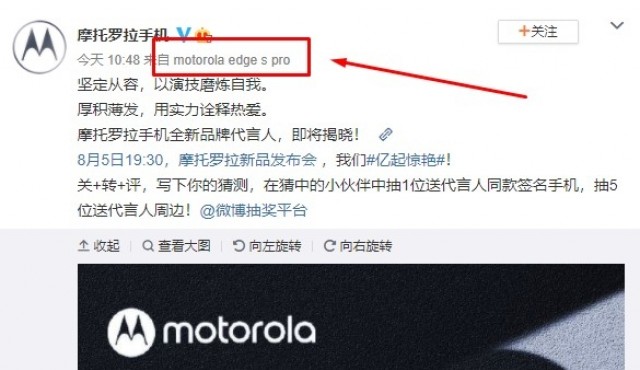 The Lenovo subsidiary has posted an announcement on Weibo, revealing the new phone will have a new brand ambassador, and we actually spotted the “moto edge s pro” moniker in the section where it says what device was used to make this post.

The Motorola Edge S was launched in January with a Snapdragon 870 chipset, followed by a global announcement where the phone was renamed Moto G100. While the Edge series is not a direct successor of the G lineup in previous iterations, Motorola has been hyping the camera capabilities of its upcoming phones in China.

The Edge 20 Pro is a lovely cameraphone that comes with SD870, just like the G100, but boasts a 108 MP main sensor and an 8 MP telephoto camera with 5x optical zoom (there’s also a 16 MP ultra-wide cam), so is it the Edge S Pro? We’ll know for sure once the Thursday event is over.