Aside from the XR20, HMD Global has announced another two phones, the 6310 and the C30. The former is, as the name implies, yet another reinterpretation of a classic Nokia phone from years past, while the C30 is an interesting Android smartphone with a big battery and low price.

Let’s start with the C30, then. The C-series is Nokia’s new entry-level family of devices, and as such you shouldn’t expect reccord-breaking specs on offer here. In fact, the Nokia C30 is the new “king” of the C-series, with the biggest screen and largest battery capacity at 6.82″ and 6,000 mAh, respectively.

The screen has HD+ resolution with a teardrop-shaped notch and a significant bottom bezel that’s big enough to house the Nokia logo. On the rear there’s a 13 MP main camera with flash as well as a 2 MP depth sensor, while for selfies you get a 5 MP snapper.

The C30 is powered by the Unisoc SC9863A chipset, which has an octa-core Cortex-A55 CPU clocked at up to 1.6 GHz. There will be three RAM/storage combos: 2/32GB, 3/32GB, and 3/64GB. The phone runs Android 11 Go Edition, Google’s trimmed down OS version for dirt cheap devices. Speaking of pricing, the Nokia C30 will be available starting at €99. 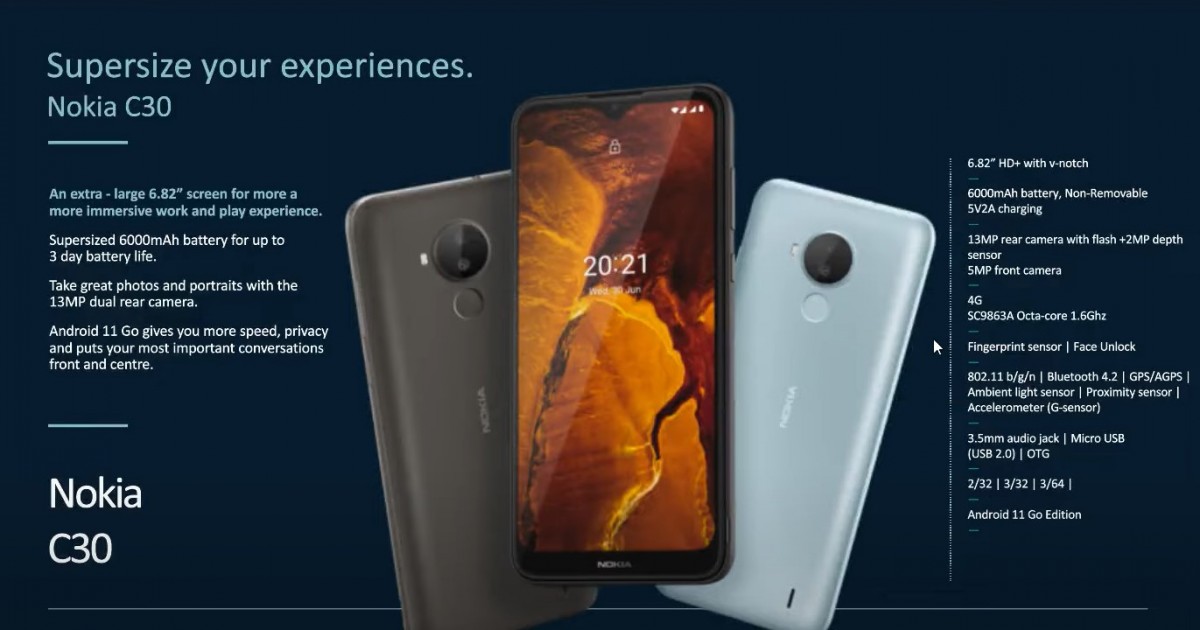 It has 4G support (no 5G here), and 10W charging. A fingerprint sensor is on the rear, and there’s support for camera-based face unlock too. The device has a 3.5mm headphone jack and a microUSB charging port. It will receive security updates for two years (no mention of any Android version updates though).

The new 6310 has a design reminiscent of the original, but with a larger screen and bigger buttons, both things that HMD thinks will aid in usability. The display is a 2.8″ curved panel with QVGA resolution. The phone also has a 1,150 mAh battery for “weeks” of use, a wireless FM radio, 2G support, the Series 30+ platform on board, a microUSB port for charging and a 3.5mm headphone jack, internet connectivity, built-in Snake, and Torch functionality. 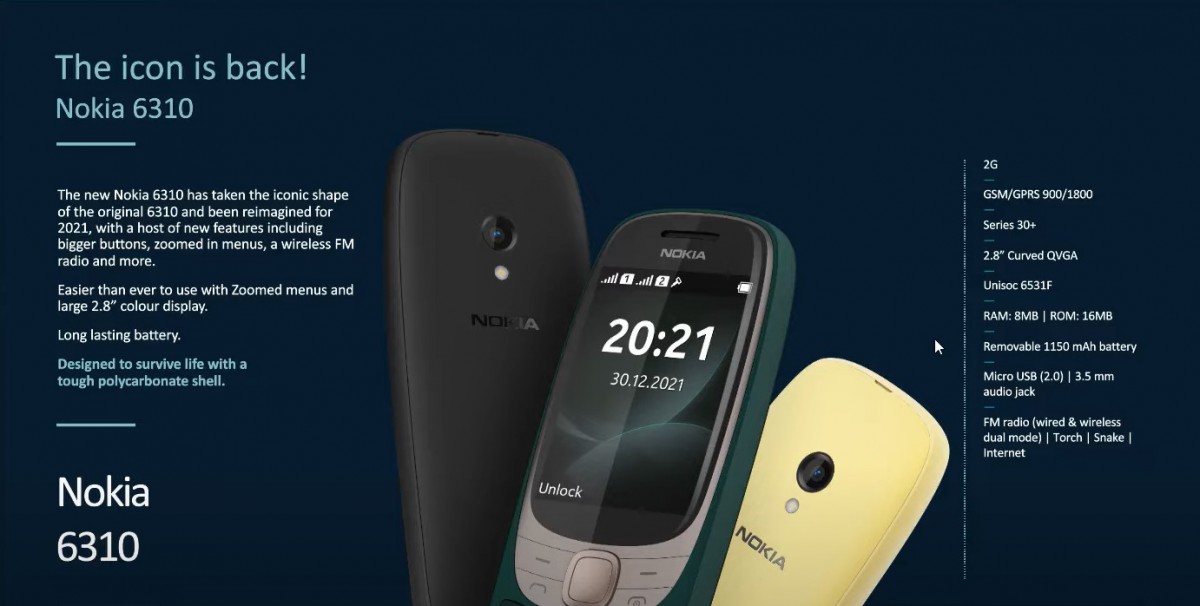 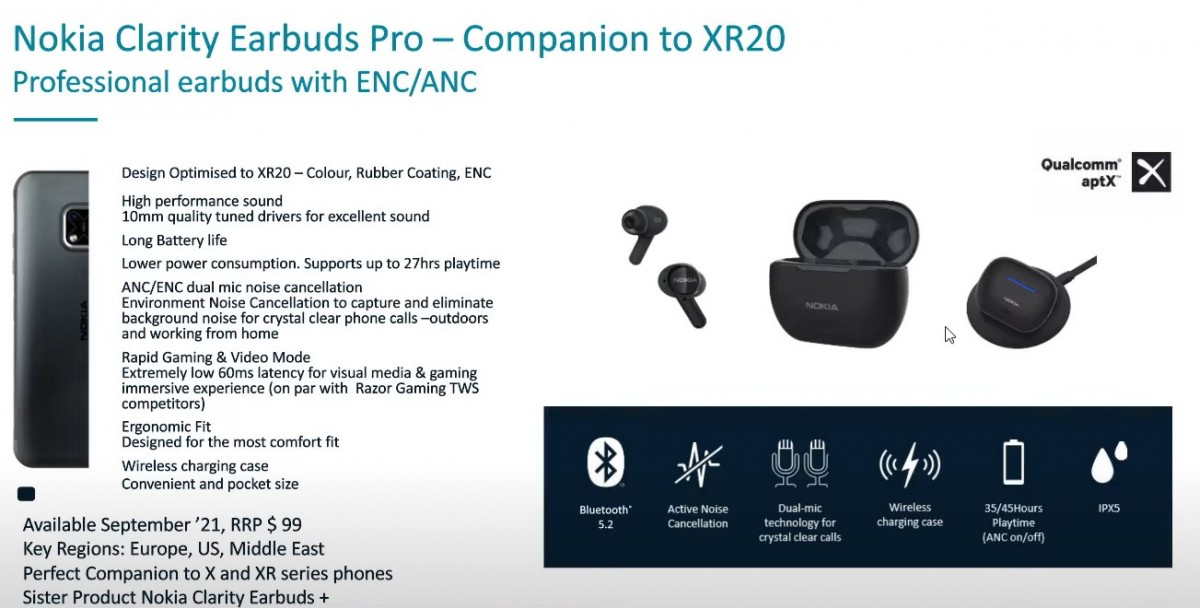 The Nokia Clarity Earbuds Pro feature Bluetooth 5.2, active noise cancellation, aptX support, a design “optimized” to the Nokia XR20 smartphone (in color, rubber coating), 10mm drivers, up to 27 hours total playtime with the case, a low-latency 60ms gaming mode, IPX5 water resistance, and support for wireless charging of the case. These will go on sale in September in Europe, the US, and the Middle East for $99. 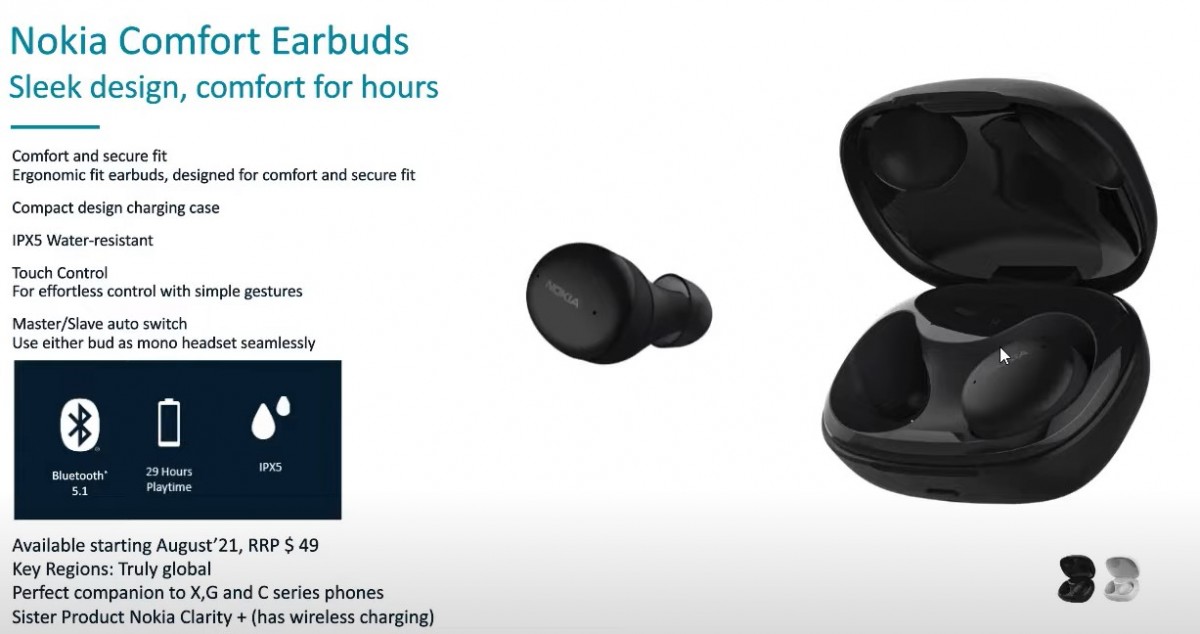 The Nokia Comfort Earbuds have an “ergonomic fit”, compact design, IPX5 water resistance, Bluetooth 5.1, touch control, master/slave auto-switch to use either earbud as a mono headset, and 29 hours of total playtime with the case. These will be out in August globally for $49. 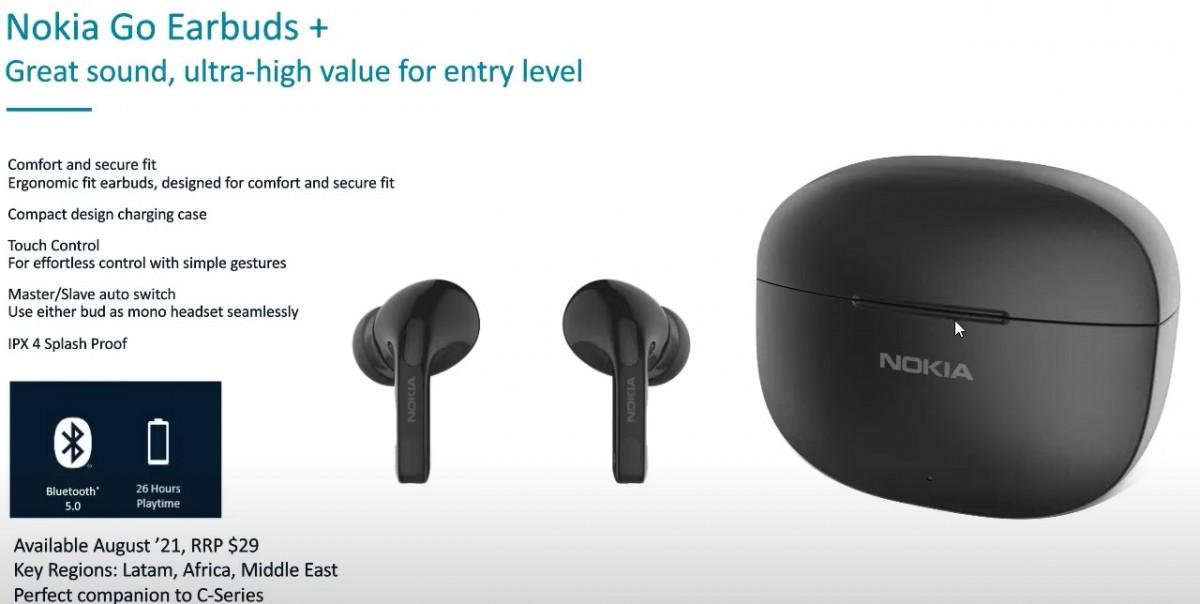 Finally, the Nokia Go Earbuds + sport Bluetooth 5.0, 26 hours of total playtime with the case, touch control, the master/slave auto-switch, and they’re IPX4 splash proof. These will be out in August for $29 in Latin America, Africa, and the Middle East.