Wearable tech is nothing new, though definitely trendy and currently on the rise. Same goes for the broad Internet of Things (IoT) ecosystem. Even things like smart patches, meant to go on your skin kind of exists, though current implementations tend to use traditional crystalline silicon as their base or substrate for the actual chips. In contrast, natively flexible electronic devices use substrates such as paper, metal foil or as is the case with PlasticARM – plastic. Thin-film transistors (TFTs) are grafted on top of that substrate, resulting in truly flexible chips. The benefits of this technology stretch beyond flexibility, as well. TFTs can be fabricated on flexible substrates at much lower cost that metal–oxide–semiconductor field-effect transistors (MOSFETs) fabricated on crystalline silicon wafers. The end products also tend to be thinner and comfortable to wear or fit on various surfaces. 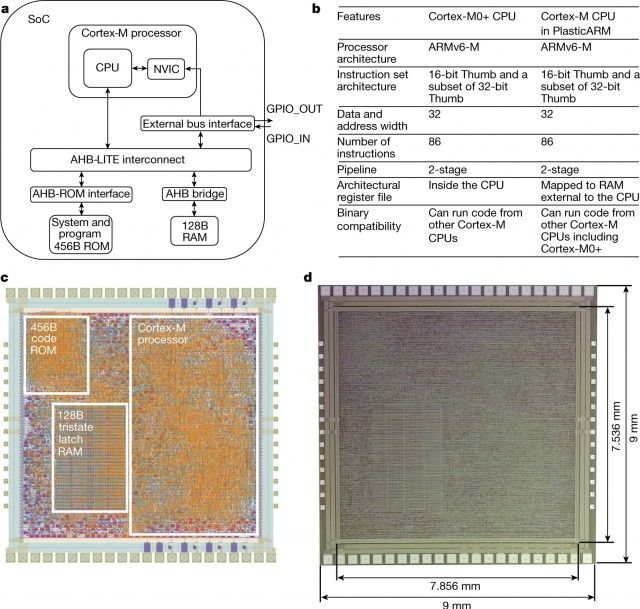 It is important to note that PlasticARM is an actual, fully-functional proof of concept, created by ARM. It has an area of 59.2 mm2 (without pads), and contains 56,340 devices (n-type TFTs plus resistors) or 18,334 NAND2-equivalent gates, which is at least 12 times higher than the best previous integrated circuit (that is, binary neural network (BNN) FlexIC). The microprocessor can be clocked at up to 29 kHz and consumes only 21 mW, which is predominantly (>99%) static power, with the processor accounting for 45%, memories 33% and peripherals 22%. The SoC uses 28 pins, which include clock, reset, GPIO, power and other debug pins. In simpler terms, this is a fully functional 32-bit ARM chipset. Not just a processor, but memory, I/O, the works. Attach some appropriate and even flexible sensors to it and the sky is the limit.

To be perfectly clear, though, even at 12 times the TFT count of its closest siblin, PlasticARM is not a powerful chip by any stretch. It uses its own Cortex-M architecture, based on the entry-level ARM-Cortex-M0+, that implements Armv6-M architecture supporting the 16-bit Thumb and a subset of the 32-bit Thumb instruction sets, making in binary-compatible with Cortex-M class processors and their code. You can definitely dig down deeper into the subject at the source link, but again, simply put – that makes PlasticARM fairly standard and universally-functional. 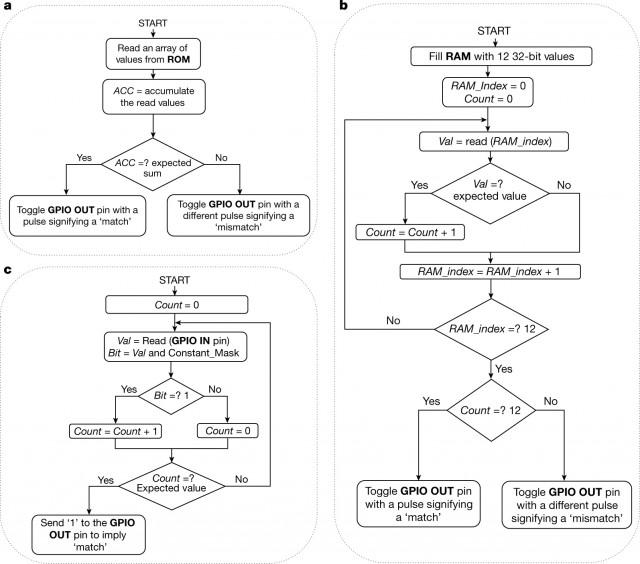 To reiterate, ARM already has a prototype running a total of three, extremely simple programs. If you take a look at the logic flowcharts, though, it’s easy to see that the logic already present and achievable is more than enough to enable a whole new wave of smart devices and even objects. Things like smart clothing with sensors, smart containers, like packaging that can measure and determine if food is still good. The possibilities are endless and truly captivating, going deep into the realm of Internet of Everything. Futuristic stuff all around and it’s already happening today!