Realme recently confirmed that the GT Neo2, arriving on September 22, will be powered by the Snapdragon 870 SoC, feature a punch hole display, and pack a 5,000 mAh battery with 65W charging support. Today, the company took to Weibo to tell us more about the GT Neo2’s screen.

Realme says the GT Neo2 will sport an E4 display with a peak brightness of 1,300 nits and 15% reduced power consumption compared to Realme GT 5G’s screen.

The display will have a 600Hz touch sampling rate and a 120Hz adaptive refresh rate, allowing the screen to switch between 30Hz, 60Hz, 90Hz, and 120Hz, depending on the app and content. 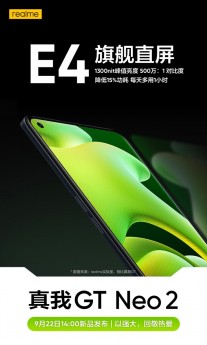 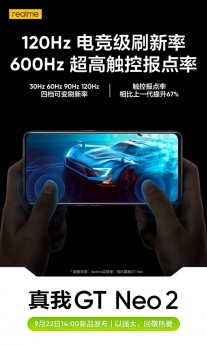 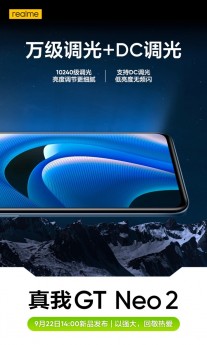 Additionally, the panel will support DC dimming and 10,240-level brightness adjustment. Realme is yet to confirm the screen’s diagonal and resolution, but thanks to TENAA, we know the phone will pack a 6.62″ FullHD+ AMOLED display.

Realme previously confirmed the GT Neo2 will have a Diamond Ice Core Cooling System (machine translated from Chinese) onboard with a heat dissipation area of 17,932mm².

The company also gave us a look at the GT Neo2’s Black Mint variant featuring a rear panel covered with AG Glass and having a satin finish. The image also confirmed a triple camera system on the phone’s back, headlined by a 64MP primary camera. The other two cameras, according to TENAA, use 8MP and 2MP sensors, rumored to use ultrawide and macro lenses, respectively.