The Realme GT Neo2, arriving on September 22, is officially confirmed to have the Snapdragon 870 SoC at the helm. The company has also revealed that the GT Neo2 will come with a 120Hz E4 punch hole display, 64MP triple camera, 5,000 mAh battery, and 65W charging. Now the latest information coming our way from reliable tipster Digital Chat Station reveals there’s another version of the GT Neo2, powered by a custom Dimensity 1200 AI chip. 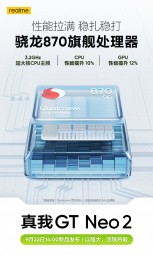 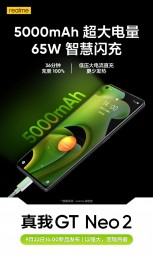 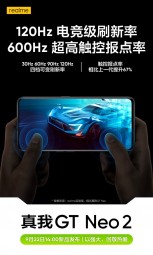 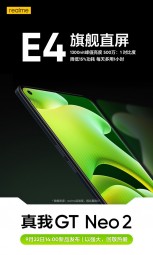 The tipster also tells us that the Dimensity 1200-powered GT Neo2 will pack a smaller (4,500 mAh) battery, but it will charge at the same speed as the Snapdragon version.

Additionally, the Dimensity variant will feature a 6.43″ FullHD+ 120Hz OLED panel with a punch hole in the upper-left corner for the 16MP selfie camera. The Snapdragon-powered GT Neo2 is also expected to come with a 16MP selfie shooter, but TENAA revealed its screen will have a bigger diagonal (6.62″).

The rest of the specs of the GT Neo2’s Dimensity version revealed by the source include a 64MP triple camera and an in-display fingerprint scanner. The smartphone will be 8.4mm thick, weigh 186 grams, and cost around CNY2,000 ($310/€265) in China. Although it’s unclear if it will be announced alongside the Snapdragon 870-powered GT Neo2 next Wednesday or come later.