Realme’s first smartwatch came out a year ago and since then we’ve seen four more smartwatches from the brand. The latest at our doorstep is the Realme Watch 2 – a direct successor to the Realme Watch and it’s time to see what a year’s worth of development brings to the table.

Looks alone will tell you that not much has changed even though the new model brings a brighter display (still LCD though) and a larger battery rated to last up to 12 hours on a single charge. The software front is also overhauled, allowing you to control Realme AIoT peripherals directly from your wrist. You’re also treated to the usual mix of activity and sleep tracking, heart rate monitoring and blood oxygen level measurements. 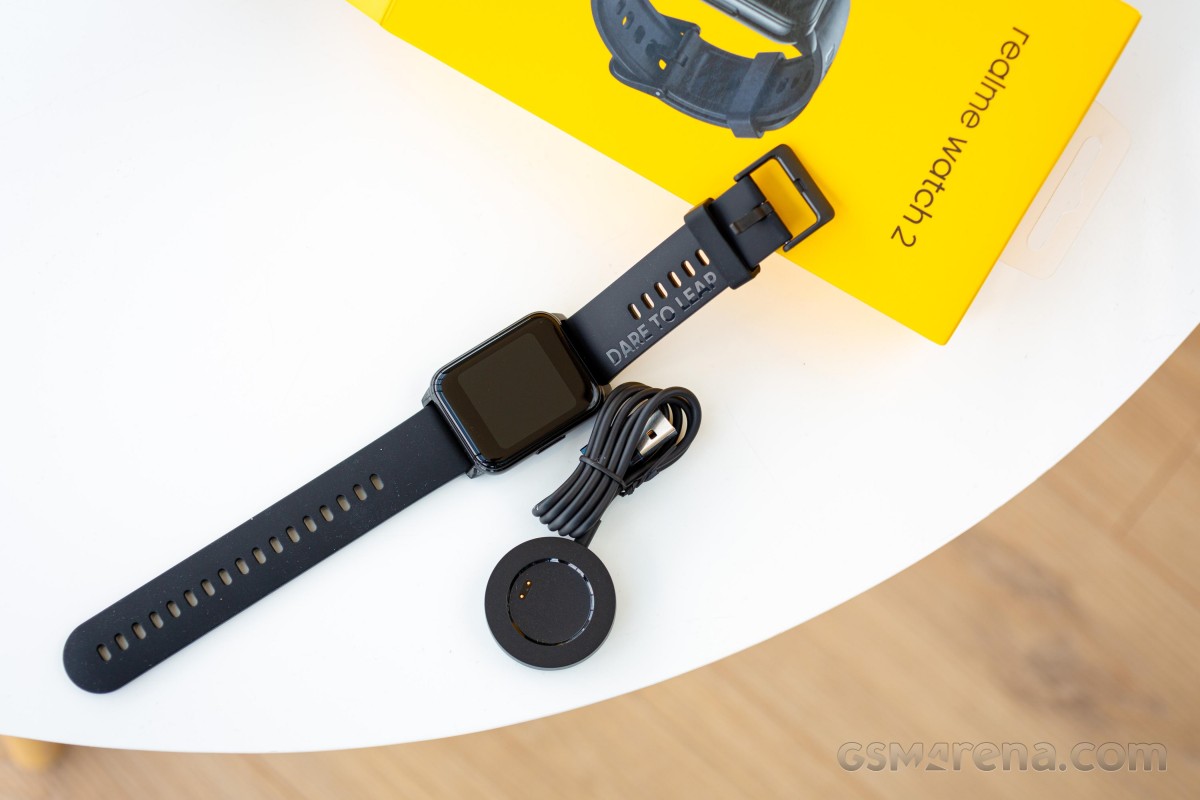 So is the Watch 2 a worthy successor to the watch that started it all for Realme or are you better off looking somewhere else for your health and fitness tracking needs? Let’s find out in our Realme Watch 2 review.

Realme Watch 2 brings a square look with an all plastic frame and 22mm silicone watch strap. The display now comes with uniform top and bottom bezels, unlike its predecessor which had a noticeably larger chin. The Realme logo on the watch is also gone which adds to the stealthier look. There’s a single button on the right side that acts as a sleep/wake and back button. 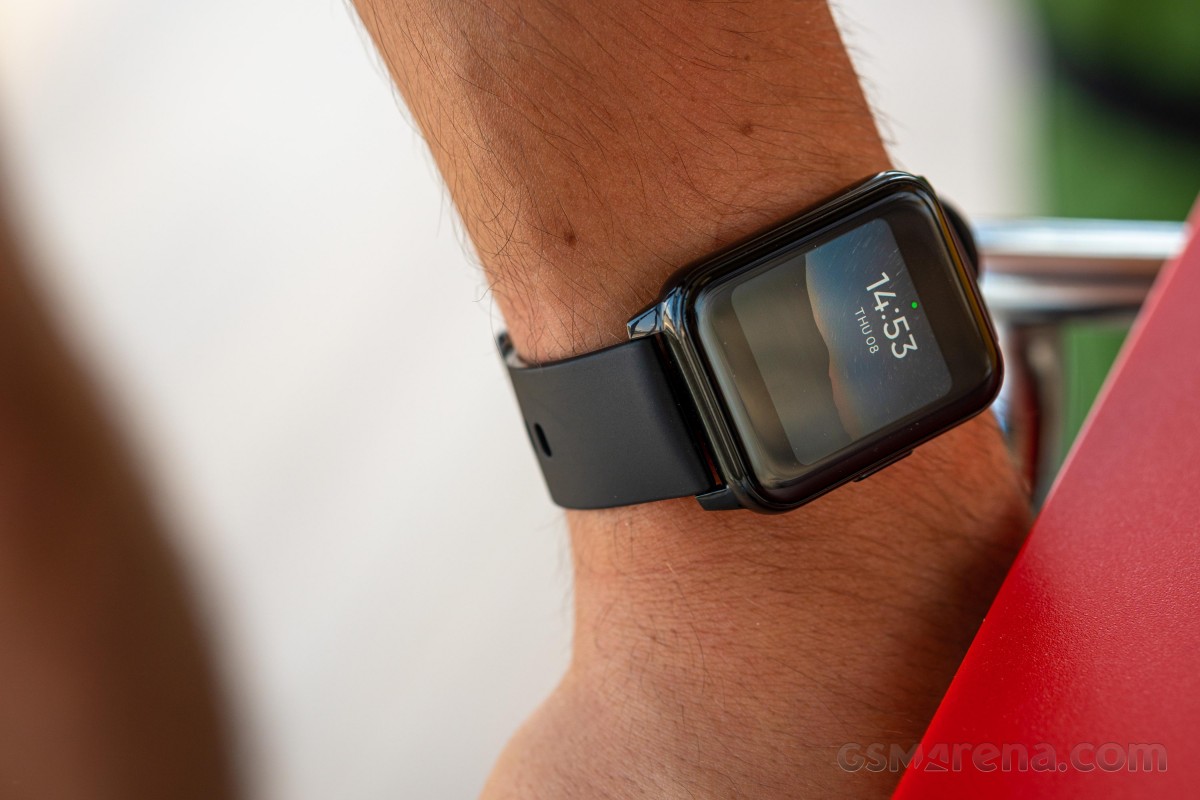 Other than the altered display bezels and watch strap, the Realme Watch 2 is visually identical to its predecessor in all aspects. It still boasts the PPG optical heart rate and SpO2 sensors, charging pins and IP68 rating. The Watch 2 feels far from premium on your wrist though it’s certainly light and fairly compact which I quite liked. There’s also a subtle Dare to Leap branding on the watch strap which differentiates it from the old model. 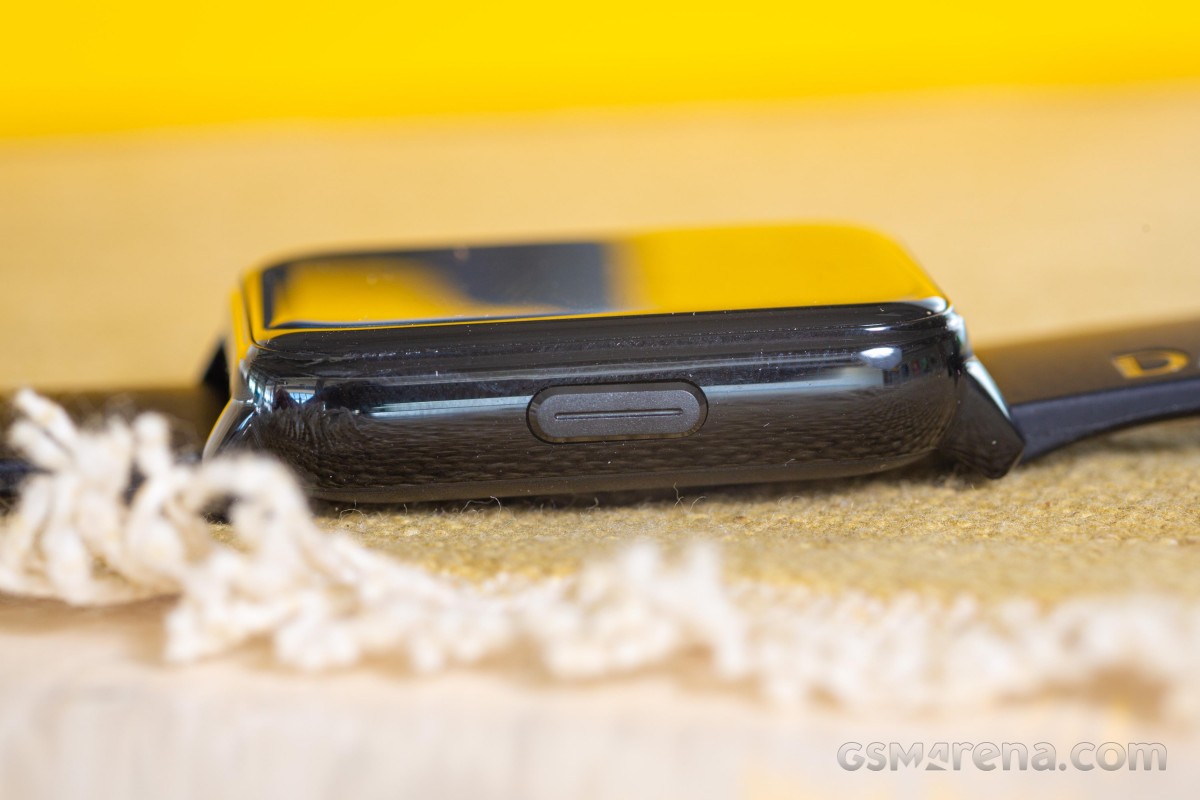 The build is decent enough for the entry-level price range and I’m happy to report that the Realme Watch 2 held up nicely in my day-to-day usage while surviving the occasional dink and bump without getting scratched up. The side button does not offer the most tactile feeling and makes a squeaky noise when pushed. The onboard vibration motor offers soft and strong signals and I found the former to be good enough for my daily use.

The panel on the Watch 2 is a 1.4-inch IPS LCD with the same 320×320-pixel resolution as its predecessor. The new bit here is the peak brightness which now boosts up to 600 nits compared to 380 nits on the old model. Still, there’s no auto-brightness control and the display is certainly not that impressive in direct sunlight compared to the AMOLED panels on competing watches.

You get a five-stage manual brightness level control as well as raise to wake functionality which struggled to pick up the occasional wrist lift during my testing. You also don’t have the option to schedule the lift to wake feature for specified time frames and need to turn it on or off manually which feels like a chore, especially late at night. 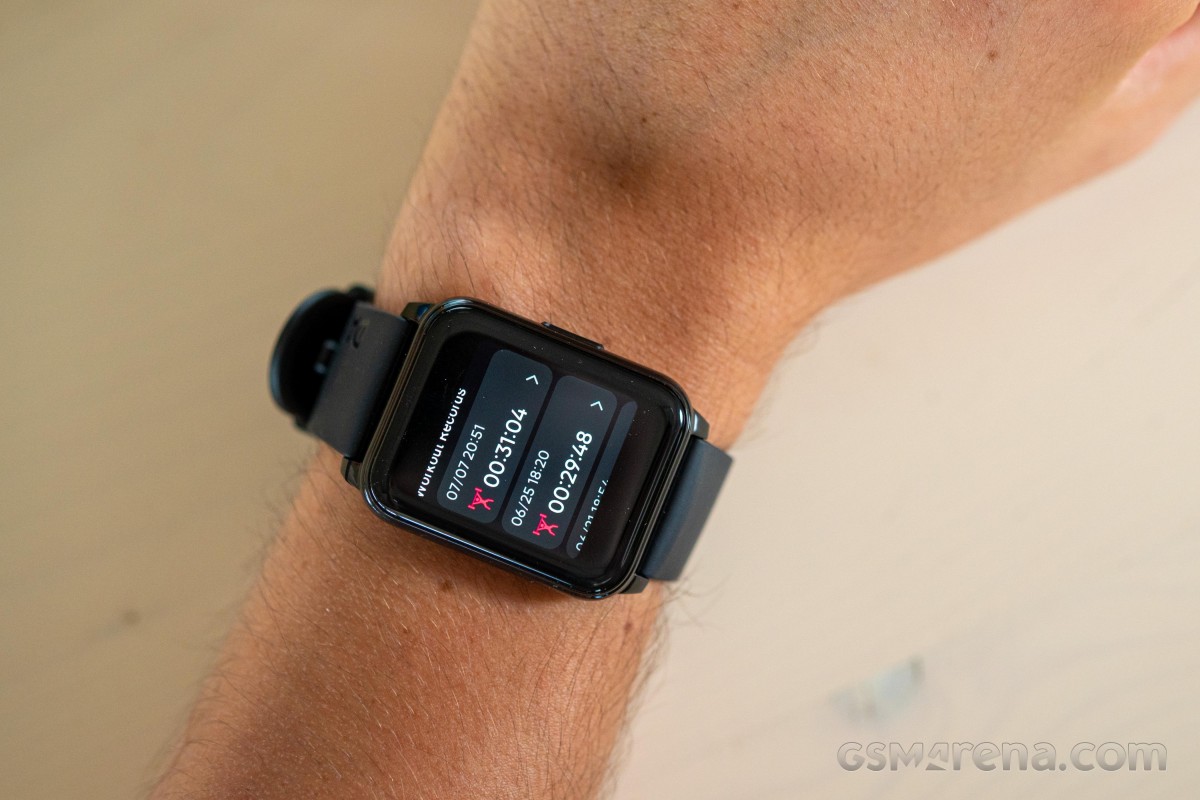 There’s a boatload of new watch faces on Realme Watch 2, including plenty of live ones too and you’re also free to create your own with a picture of your choice though you don’t get the option to rearrange any of the watch face widgets. The Watch 2 can hold six watch faces on its own and you can easily change between them by holding down on the watch face screen.

The user interface on Realme Watch 2 is nearly identical to its predecessor. You get your control center on the left of the watch face, followed by your daily activity page on the right, heart rate monitor, weather info and music controls. Swiping down gets you to the notification screen while a swipe in the opposite direction gets you to the app menu. 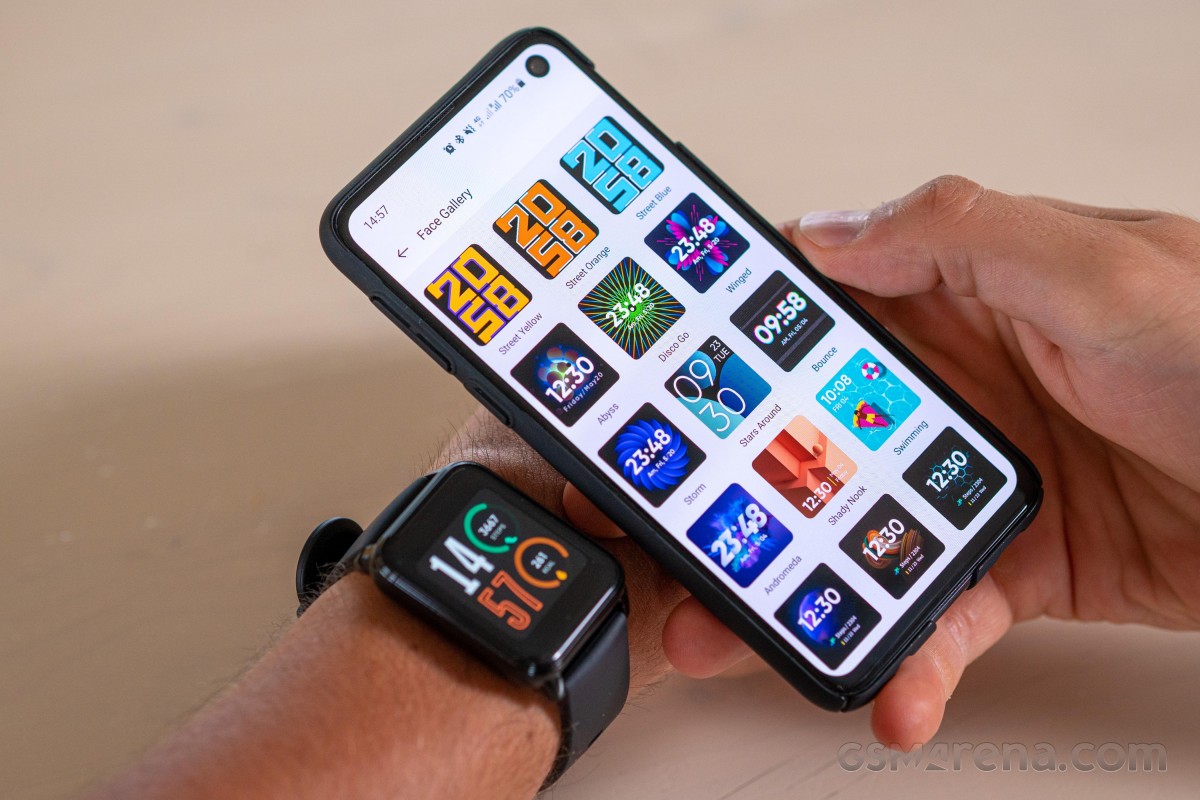 The UI feels responsive and snappy for the most part. There was the occasional glitch with the lift to wake function on the watch but I can confidently say Realme Watch 2 performs quite well compared to other budget smartwatches in the class.

You still have to pair the watch with a smartphone via the Realme Link app. It’s important to note that the app now supports Apple devices booting iOS 11 and up which was not the case on last year’s smartwatch. The setup process is fast and straightforward and the Link app provides you with all the workout and health data metrics you’d need.

There’s a total of just 10 sports modes out the box though the Realme Link app has 80 more modes that you can swap out depending on your needs. You can also check out a simplified view of your activity records on the watch itself or with more details inside the Realme Link app.

Other health info accessible directly on the watch include your sleep, heart rate and SpO2 readings. There’s a breathing/meditation app, timer, stopwatch, alarm app which allows you to set alarms on the watch itself, a camera shutter and a find my phone function that plays your phone’s ringtone to help you locate it. 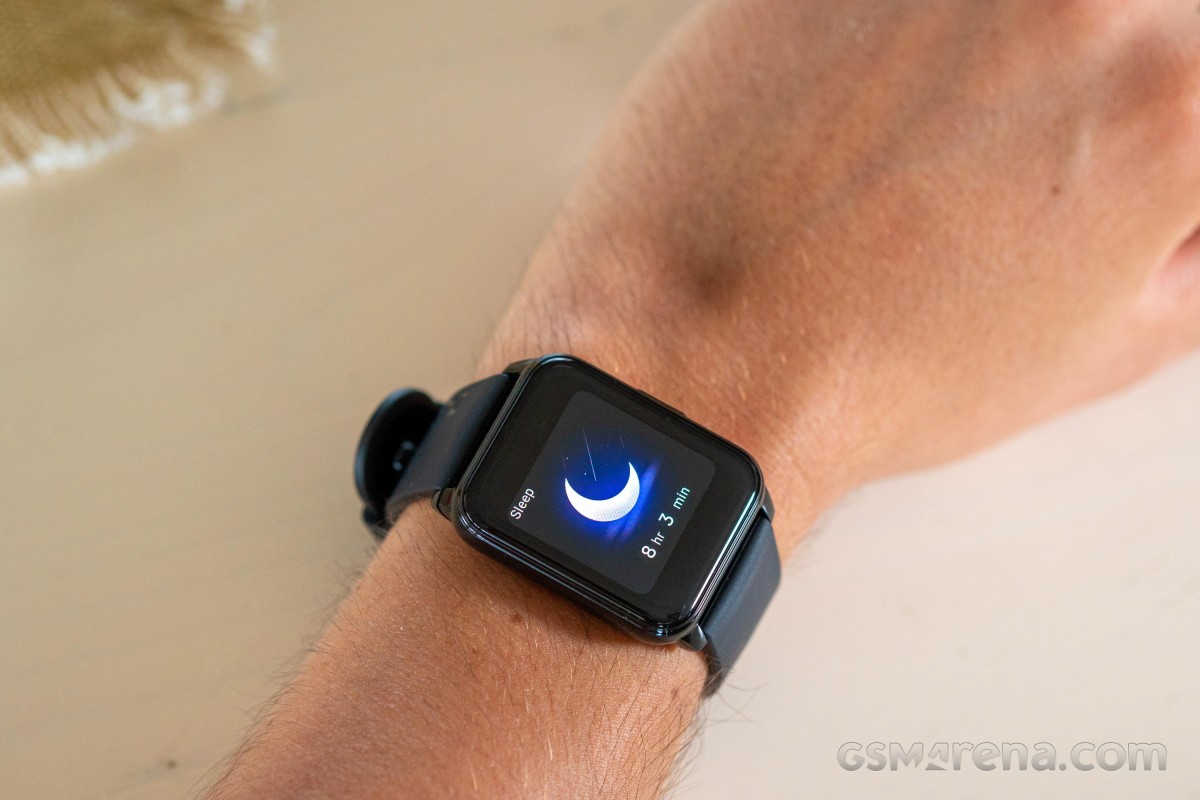 Realme’s Link app is also present on the Watch 2 allowing you to control supported Realm AIoT products like air purifiers, smart lamps and smart speakers without the need of a smartphone.

Like previous smartwatches in Realme’s portfolio, Watch 2 performs all the standard array of health and fitness tracking you can expect. There’s an abundant list of over 90 sports modes though you can only hold up to 10 of them at a time on the watch. You really can’t complain when it comes to variety, there are some oddly specific options like fishing, fitness gaming, hula hoop and darts. I stuck to the more traditional outdoor/indoor running, cycling and weight training and can report similar tracking accuracy to the Realme Watch S that I tested a while back.

During workouts, Realme Watch 2 reports on your heart rate level, calories burned and total workout duration. There’s no built-in GPS here, which is to be expected given the price point. Runs were aided by my phone’s GPS and the combination worked just fine while providing accurate results. The Realme Link companion app stored up to two weeks of workout data giving you a breakdown of your threshold heart rate complete with total calories burned, average HR values and total workout duration. 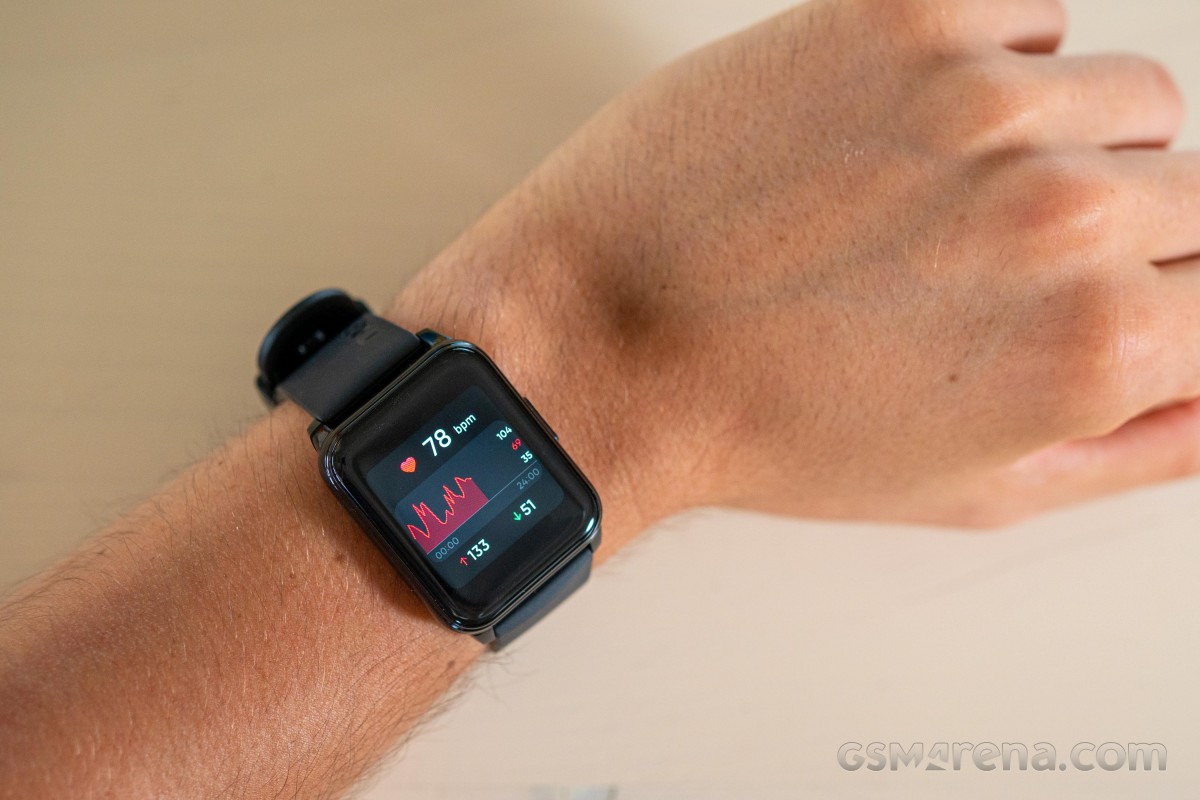 Compared to my daily driver Xiaomi Mi Band 5, Realme Watch 2 produced nearly identical heart rate readings while steps count was slightly higher with an average of 200 more steps appearing on the Realme Watch 2. Realme is also giving you the option to automatically measure your HR levels in 5-minute, 10-minute, 20-minute or 30-minute intervals 24/7 and to receive alerts if your pulse goes above or below a certain threshold.

Readings for blood oxygen levels (SpO2) were on par with past Realme Watches. You are still required to manually start readings from the watch as there’s no automatic option like with heart rate measurements. You also have to keep the watch tightly strapped just above your wrist to get the most accurate measurements. While we’re here, keep in mind that SpO2 readings from Realme Watch 2 (or any smartwatch) should only be used as a reference and not for medical diagnosis or treatment.

Sleep tracking is a clear step up from the original Realme Watch and the Watch S mostly in the fact that it could actually record my go to sleep and wake-up times. Sleep data consists of Deep sleep, Light sleep and time spent awake. For some reason, the REM sleep portion was removed altogether though its absence is not detrimental. You can finally read last night’s sleep data on the watch itself which is another welcome addition. The Link phone app stores a month’s worth of sleep data. 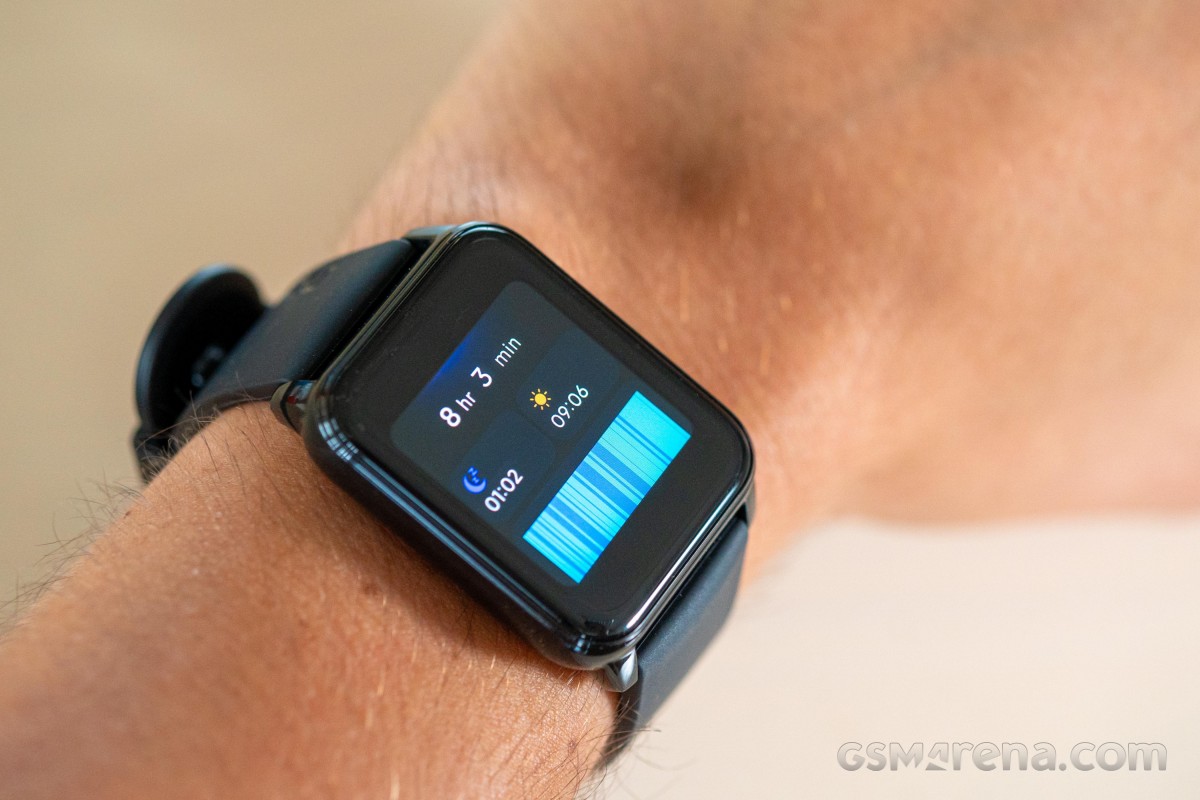 Notifications appear as soon as they are received on your phone and while you can only read and dismiss them without interacting in any other way, I found the system to be quite responsive. The Realme Watch 2 managed to display notifications with different languages though it struggled with most emojis.

There’s no speaker or microphone here which also means you cannot take calls on the Realme Watch 2. You get a notification and can dismiss incoming calls whenever someone tries to reach you, but nothing more.

I also encountered several bugs in my time testing the Watch 2 including a connectivity issue that prevented some watch data to sync with my phone straight away and required a reboot of the Watch. There’s also the aforementioned unregistered raise to wakes and some complications in the Realme Link phone app which could certainly use some polish with future software updates.

Realme claims 12 days on a single charge and that number is certainly achievable with some moderation to the health and sports tracking features on the watch. My use case included the following settings:

With these options I managed nine days on a single charge, usually starting day 10 with less than 10% battery which prompted a recharge. These results are quite impressive and a big advantage over the previous-gen Realme Watch which lasted for about four days with a similar usage pattern. A full charge took just under 2 hours.

Realme Watch 2 is a clear upgrade over the original Realme Watch in terms of battery endurance and sleep tracking. The added sports modes are a nice touch as is the reworked screen design. At $55/€45/INR 4,125 you get your money’s worth here and that price will likely go down with future sales promotions.

I encountered several connectivity issues and some software bugs along the way though I’m hopeful these can easily be ironed out with future software updates. The lack of auto-brightness and the use of an LCD panel instead of an AMOLED one are other pitfalls. Despite these shortcomings, Realme Watch 2 offered a smooth feeling UI, a varied watch face selection, decent health and fitness tracking in a lightweight form factor. 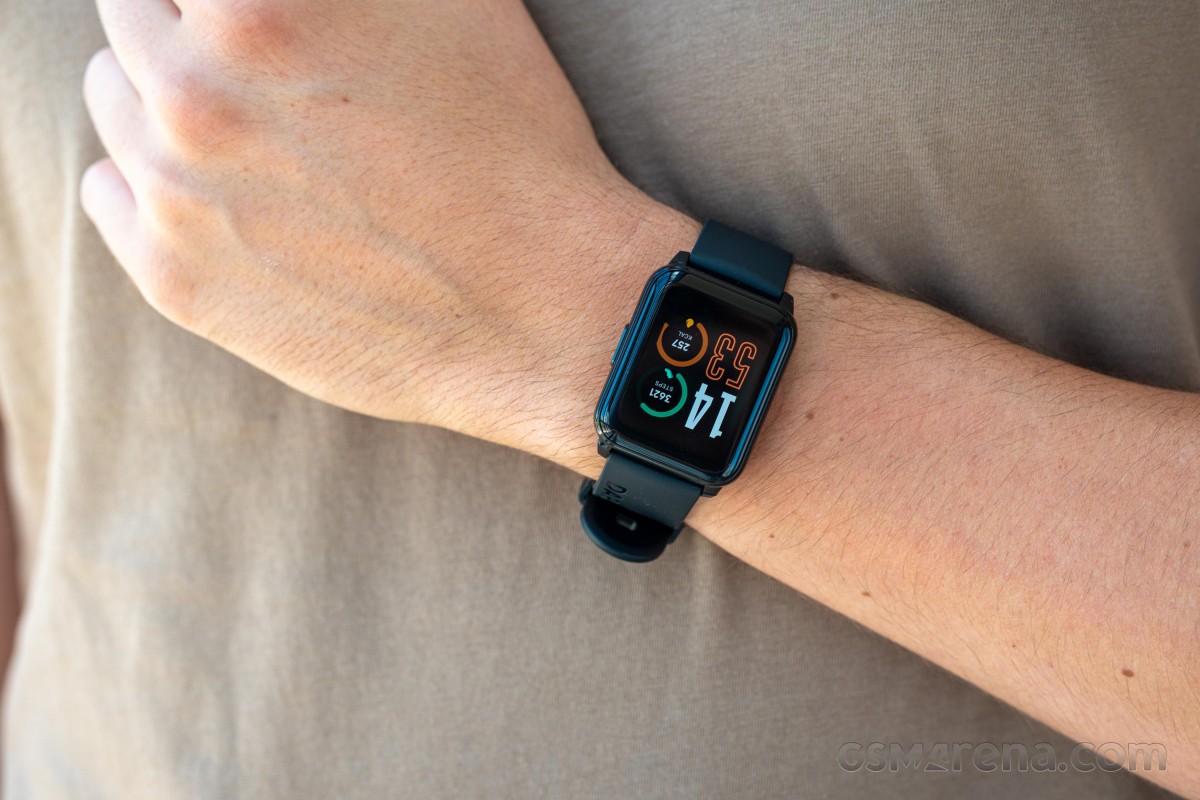 The design is basic and the plastic frame does not exude premium build quality yet the Realme Watch 2 felt good enough and performed quite well with health and fitness tracking while also giving me timely notification updates and ample battery endurance.