Geekbench has a scorecard for a different model, the SM-326, which is powered by a MediaTek Dimensity 720 chipset. This should will be the Samsung Galaxy M32 5G. The Galaxy A32 5G is also powered by the 720 and the two models probably share more than just the chipset. 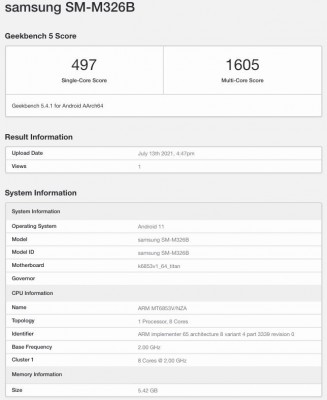 Anyway, the Galaxy M32 5G that did the benchmark had 6 GB and was running Android 11. A dual SIM version of the phone was certified by BIS in India recently, it has a Wi-Fi certification as well.

Considering the similarities between the M32 and A32 4G models, the 5G ones should be very similar as well.