The National Broadcasting and Telecommunications Commission (NBTC) in Thailand also gave the Samsung Galaxy Z Flip3 its stamp of approval, not long after the FCC did the same. Meanwhile, the Indonesian wireless authority certified the S Pen Pro that will be supported by the Galaxy Fold3. 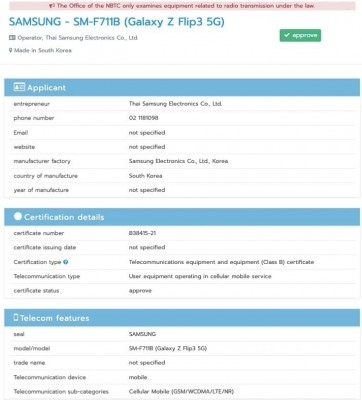 Thailand will be getting the SM-F711B version of the Z Flip3, which supports the local 5G bands. The third iteration of the clamshell foldable will be slightly more compact and will have the total battery capacity of 3,300 mAh (split between two cells, 2,300 + 900 mAh) as the Z Flip 5G. Unfortunately, it looks like it will retain its charging speed as well, just 15W. However, it will feature some upgrades over its predecessor, including a Snapdragon 888 chipset and IPX8 water resistance.

As for the S Pen Pro (model number EJ-P5450), this appears to be a different model than the one that was unveiled earlier this year alongside the Galaxy S21 Ultra. It’s not clear how exactly these two differ, but the Pro stylus will be larger than the S Pens that come with Galaxy Note phones since it is not intended to sheath into the phone itself.

The Samsung Galaxy Z Flip3, Z Fold3 and more will be unveiled on August 11