After we saw all of the Galaxy Z Flip3’s angles through official-looking renders, it’s now time to take a gander at the Galaxy Z Fold3’s exterior.

The renders, reportedly provided by an inside source, show Samsung’s upcoming foldable from nearly all angles – just the top and bottom frames are missing.

The Galaxy Z Fold3 is rendered in three colors – Black, Green and a gradient (Phantom?) white and pink finish. All three appear to have a matte surface on the rear panel. 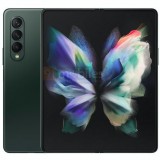 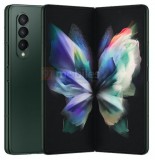 The images show a punch-hole outer camera, rumored to have a 10MP sensor, while on the unfolding inner display we should see a 16MP under-display camera.

The Galaxy Z Fold3 has a capacitive fingerprint scanner and a volume rocker on the right side. There’s a triple camera on the rear, which appears a conventional setup – no periscopes, no IR sensors. 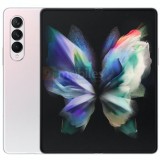 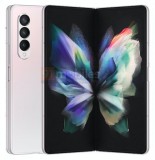 Previous reports have revealed a pretty rounded overall idea of the specs of the Galaxy Z Fold3. It will have a 7.55-inch inner foldable display, a 6.23-inch outer display – both of 120Hz refresh rate.

We expect a Snapdragon 888 or possibly 888+ with 12GB or 16GB of RAM. There is a slight possibility that Samsung would use its Exynos 2100 or a newer, more powerful variant of it, but older Fold smartphones have all been Qualcomm-powered and it could remain thus. There are 256GB or 512GB of storage. 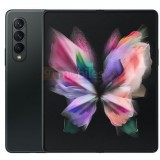 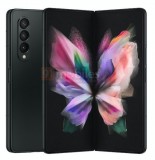 The Galaxy Z Fold3 is rumored to support the S Pen, though like the Galaxy S21 Ultra, the S Pen won’t be bundled, nor will there be a slot for it in the body of the phone.

The Samsung Galaxy Z Fold3 will become official alongside the Z Flip3, Galaxy Watch4 and Galaxy Buds2 in August.