The Motorola Edge S Pro will be unveiled on Thursday, an Edge 20 Pro for China


Yesterday, Motorola revealed that there is a new smartphone coming on August 5 (Thursday) and that it will have a new brand spokesperson for China. This info was posted from a Motorola Edge S Pro, a model that hasn’t been announced yet, leading to predictable speculation. 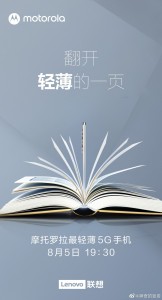 Now the company has made it official and has sent out press invites. This will be Motorola’s thinnest and lightest 5G phone yet (6.99 mm and 163g, according to a teaser). How does it relate to the recently unveiled Motorola Edge 20 series? The current thinking is that the global Edge 20 Pro will be sold as Edge S Pro in China.

From the teasers that Motorola has been posting on Weibo it is clear that the Pro model will have a display with 144 Hz refresh rate, 576 Hz touch sampling rate, a Snapdragon 870 with LPDDR5 RAM and UFS 3.1 storage and an impressive camera with up 50x digital zoom. All that matches the 20 Pro, lending credence to the “Edge 20 Pro = Edge S Pro” talk.

Retailer JD is supposed to start accepting pre-registrations for the upcoming phone, so you should be able to buy one not longer after it is announced. You can see a close-up of the camera (and a demo of its skills) in the video below:

Keep in mind that the vanilla Motorola Edge S (which was unveiled in January) has no equivalent Edge 20 model, though they do share some similarities (e.g. the Snapdragon 870 chipset). However, this vanilla model lacks the 108 MP main camera and the periscope lens. And it has a 90 Hz IPS LCD instead of 144 Hz OLED display.