If you’re still working from a conventional thermostat, maybe it’s time to get a smart upgrade. You don’t have to spend hundreds for the privilege either. Last year, Google released an inexpensive version of its famous Nest Thermostat, and it’s a great option that has held up over the long term. Well, today you can get the Snow-colored version for a brand new low of $87.99 at Amazon. The other colors (Charcoal, Fog, and Sand) are all on sale as well, but they are only going for $99.98. That’s not quite the $42 discount of the Snow, but it’s still $30 in savings compared to the thermostat’s regular $130 price that it rarely varies from. 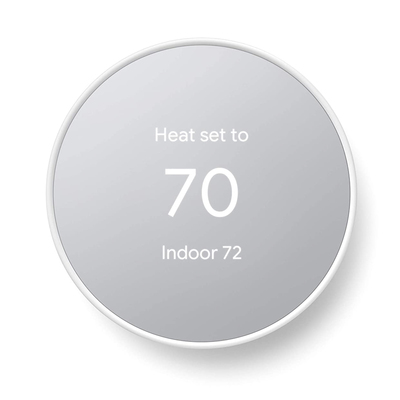 Smart enough to turn itself down when you leave so it doesn’t waste energy on an empty home. Create an energy-efficient schedule in your smartphone app. Can even provide advice to help you save more money later.

The next closest product in the Nest lineup is the older Nest Thermostat E, and you can see how these two products stack up. But you won’t find the Thermostat E going for this low of a price anywhere. It’s even going for as much as $170 at some retailers like Home Depot.

Compared to even more advanced versions, this Nest Thermostat does lack some of those advanced features. For example, you will have to manually set your schedule because it doesn’t have the learning tech other Nests are known for. Plus, you can’t use remote sensors with it to monitor different rooms around your home.

Despite that, the thermostat makes a whole lot of things around your house a lot easier. It works easily with the Google Home app on your iOS or Android smartphone, which will provide guided instructions and help you set it up. You can also use it to set a schedule or use the Savings Finder to find even more ways to save money. For example, the app will provide suggested tweaks to your schedule that help you reduce energy and waste, bring down those monthly energy bills. The HVAC monitoring tells you when something isn’t right and sends you a notification.